Gillian Shields and Dan Taylor’s Dogfish is such a joy to read for so many reasons. Another of my earliest purchases for Iris, I was initially drawn to it for the illustrations and the title, because honestly, everyone judges a book by its cover, especially children’s books.

Unlike with adult books, it is not only easy but essential to read through a kid’s book before buying (see my earlier post Say What?!). Dogfish is safe, hilarious, succinct and has some excellent lessons in pet care, reading people’s emotions on their faces and contentment.

I also really love the earthy colours and mid-century décor of the kid and mum’s apartment. When a book has few words, the font used stands out even more so it’s imperative that the right one is chosen. Although the digital reading by former Dr Who, David Tennant that came with the book in a CD could possibly come in handy, I’ve only ever played it for Iris once. Unless you have a child who is going to sit there and keep playing it while looking at the words to teach him/herself to read, there’s not that much point to it, in my opinion. They can’t ask the CD, after all, what is an “irritated but sorrowful” look can they?

A boy has a goldfish, but wants a dog.

He tries persuading his mum, using logic and his “hypnotising eyes”. 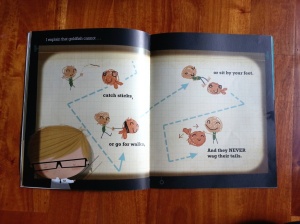 Unfortunately his mum is much too wise and even more logical: “Well, if you can’t have what you want, you could try to want what you have.” I love this mum.

So he turns his mind to making his goldfish into the best pet a boy could have – a dogfish!

And everyone is “utterly, totally, blissfully happy”. 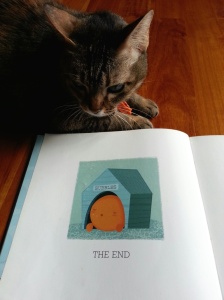